A X-Chain is a single-digit solving technique which uses a chain consisting of links that alternate between strong links and weak links, with the starting and ending link being strong. In other words, the chain involves an even number of cells having the target digit as a candidate. The target digit can be eliminated from any cell that is seen by both ends of the X-Chain.

The X-Chain technique and the Multi-Colors technique are equally powerful. Also, a X-Chain is also a Double Implication Chain and an Alternating Inference Chain.

This is an example of a X-Chain of length six for the digit 3. 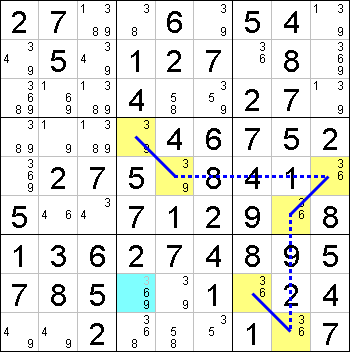 One proof for this is that we can formulate these two Forcing Chains, with the second due to the X-Chain:

In an ordinary Sudoku, the shortest useful X-Chain that allows eliminations to be made must involve at least four cells.

However, in Sudoku Variants such as Sudoku-X and Killer Sudoku, the shortest useful X-Chain can involve only two cells. An example is illustrated in the Crossover technique for Sudoku-X, made possible due to the diagonal constraints. When we eliminate candidates using a X-Chain of two cells, the same elimination can be performed using Common Peer Elimination.