Asterisk Sudoku is a Sudoku Variant invented by Peter Sudoku, who previously calls this variant Peter's Sudoku. It is an ordinary Sudoku with one extra house that looks like an asterisk, consisting of the cells r2c5, r3c3, r3c7, r5c2, r5c5, r5c8, r7c3, r7c7 and r8c5.

Peter Sudoku calls the combination of Asterisk and Windoku as Lucky Clover Sudoku.

An example Asterisk puzzle is shown below. The additional asterisk constraint is shown in orange. 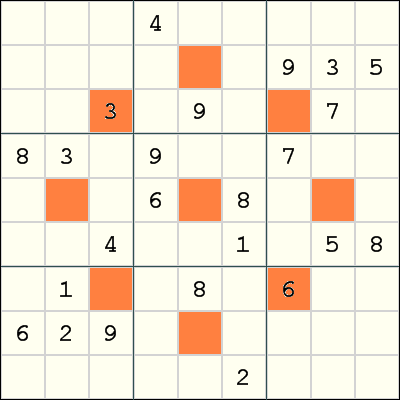 Asterisk Sudoku puzzles can contain as few as 15 givens.