The ALS-XY-Wing rule is a solving technique that uses three Almost Locked Sets.

Make sure you understand the concept of Almost Locked Sets (ALSs) before you proceed.

Say we have three Almost Locked Sets A, B and C. Suppose

Then for any digit X that is distinct from Y and Z and is a common candidate for A and B, we can eliminate X from any cell that sees all cells belonging to either A or B and having X as a candidate.

Relations to other techniques

Observe that this technique generalizes XY-Wing, and hence the name ALS-XY-Wing. Note that each of the three bivalue cells in the XY-Wing is itself an ALS, hence we can set C as the pivot cell, and the other two pincer cells as A and B respectively.

This example is taken from Ron Moore's walkthrough for Ruud's 2007 May 5 Nightmare. 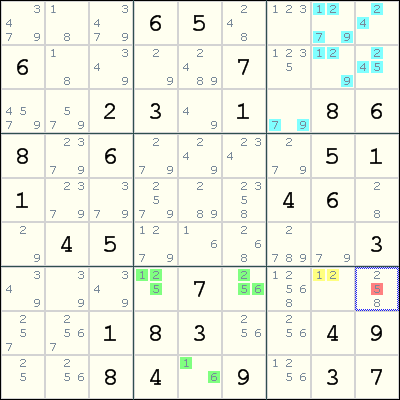 The ALS-XYZ-Wing is constructed as follows:

A possible Eureka notation for this elimination is:

Note, the reader must check the grid to ensure that r7c9 can see all the 5's in both ALS's and similarly for the links involving digits 1 and 2.

which provides greater freedom for the locations of candidates in box 3.

In this example, since the pivot ALS C is a single cell, we can replicate the same elimination using Death Blossom instead.