When a solving technique only deals with the candidates for a single digit, it is customary to use the letter X to replace this digit, both in chain notation and in the illustrating diagrams. This abstraction helps the reader understand that this is a single-digit technique and focus on the pattern rather than the pencilmarked candidates.

You are advised to use fish diagrams to illustrate these techniques. These diagrams are based on a text format used in fish-related topics in the Sudoku Players' forum.

Here is an example, illustrating a Finned Swordfish: 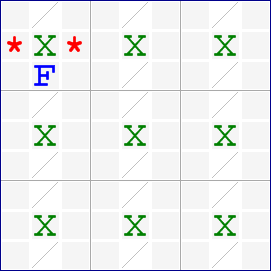 This is the same example in the text format used in the forums:

If you do not have the tools to create graphical fish diagrams, use the text version instead. Sooner or later, a helpful Sudopedian will replace it with a graphical version.

There are only a few symbolic characters used in fish diagrams.