The Grouped Turbot Fish solving technique extends the definition of a regular Turbot Fish, by allowing nodes in the loop which are groups of candidates instead of single candidates.

When all members of a group of candidates can see all members of another group, these groups are linked. The only way this can happen is when all candidates in both groups belong to a single house. The groups have a strong link if no other candidates exist in that house, otherwise they have a weak link. To be useful in a Turbot Fish, each group must be linked at both ends. This limits the number of places where groups can be found. They must be located in an intersection to be able to interact with 2 houses.

The Turbot Fish has two weakly linked groups (r46c5 and r5c46). The cell r5c5 cannot hold candidate X otherwise there is no weak link between r46c5 and r5c46. Any of the cells in r46c5 or r5c46 may miss the candidate X. It can be described with the following loop:

A more common variant is better known as Empty Rectangle. Here is a diagram: 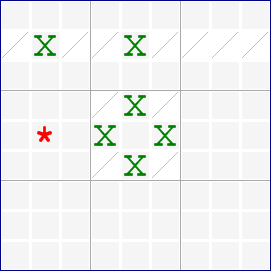 This Turbot Fish has two strongly linked groups (r46c5 and r5c46). The cell r5c5 may also hold candidate X, since this still establish a strong link between r456c5 and r5c456. Any of the cells in r46c5 or r5c46 may miss the candidate X. Here is the loop notation:

Larger Turbot Fish are also known as Turbot Chain. This implies that there must also be a Grouped Turbot Chain. These do exist, but they are more difficult to recognize as a pattern.

Here is an example: 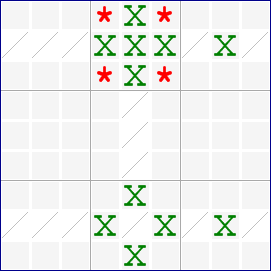 5 groups and 2 standalone candidates are included in this pattern. Here is the written chain:

Notice that groups may overlap when it does not disrupt the loop. r2c456 and r123c5 can safely overlap, but the groups in box 8 cannot.