Finned Fish is a variety of fish that has extra candidates in a single box. Like regular fish, it is a single-digit solving technique.

The same names are used for the different sizes: 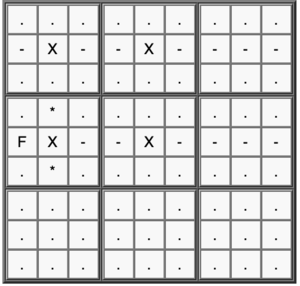 The F cell is known as the fin. In this example, there could also be a candidate in r5c3. This would be called a big fin, but the effects are the same.