BUG Lite is a solving technique that fills the gap between Uniqueness Test and BUG. It deals with isolated deadly patterns which are not Unique Rectangles. The logic is similar to Uniqueness Test.

The fundamental assumption on which this technique is based--that the Sudoku has only one solution--is a subject of debate. See Uniqueness Controversy.

Unlike the full BUG, BUG Lite can be used as an isolated pattern.

Here is an example BUG Lite: 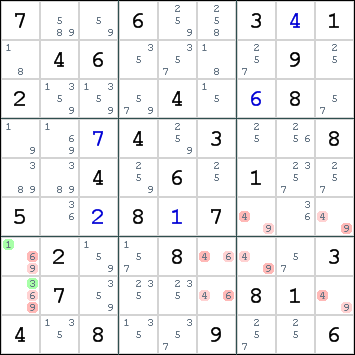 The candidates marked in red form a deadly pattern, so one of the two green candidates must be true. Furthermore, since digit 6 is locked in the intersection of column 1 and box 7, we can eliminate digit 9 from those cells.