From Sudopedia
Revision as of 04:56, 31 May 2020 by Rooted (talk | contribs) (Created page with "right|400px|thumb|Example Killer Sudoku puzzle. right|400px|thumb|Solution to the example puzzle. '''Killer Sudoku''' is one of th...")
(diff) ← Older revision | Latest revision (diff) | Newer revision → (diff)
Jump to navigationJump to search 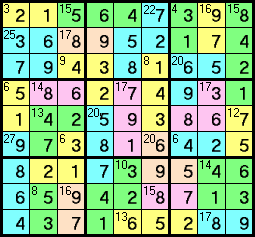 Solution to the example puzzle.

Killer Sudoku is one of the most popular Sudoku variants. The Japanese name for Killer is Samunamupure, and it is also known as Sum-Sudoku.

The puzzle has no givens, but it has the same grid format as a standard Sudoku. This grid is covered by cages, each of which enclose 2 or more cells. The cages are usually marked with dotted outlines or with separate background colors. The top-left cell is labeled with a cage sum, which is the sum of all solution digits for the cells inside the cage. Unless otherwise stated, all Killer puzzles follow the Killer Convention: all digits in a cage should be distinct. In Killer nomenclature, the boxes are often referred to as nonets.

Besides the techniques that you can use for standard Sudoku, solving a Killer requires a whole new set of solving techniques. It is often useful to know the cage combinations for particular cage sums. As an example, a cage of 2 cells with a sum of 3 has only one possible combination: 1 or 2. See this category for a list of Killer Sudoku techniques.