From Sudopedia
Revision as of 04:26, 31 May 2020 by Rooted (talk | contribs) (Created page with "Various diagrams and notations are commonly used by the Sudoku community. As such, these diagrams and notations can be found sprinkled all over Sudopedia. A good part of these...")
(diff) ← Older revision | Latest revision (diff) | Newer revision → (diff)
Jump to navigationJump to search

In a Sudoku, you are presented with a starting grid with some digits already given in some cells. These digits are usually referred to as givens. Your task is to fill up the remainder of this grid, as described in the introduction. An example grid is shown below. (This grid is rated easy and can be solved using singles alone.) 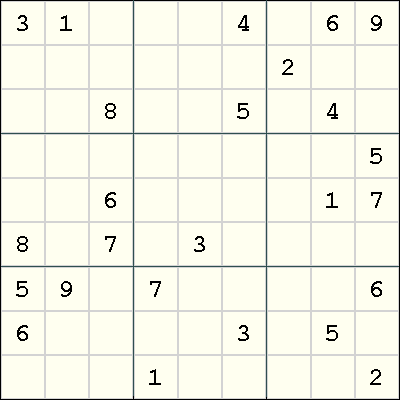 However, in the Sudoku Forums, it is often inconvenient (or sometimes impossible) to upload graphics (e.g. GIFs, JPGs, PNGs). So an alternative text-based format for the same grid is as follows.

The above format allows easy visualization of the grid, but it takes up a fair amount of screen estate. Sometimes, people want to describe many starting grids in one go, say, as examples that can be solved using a certain solving technique. For such usage, the Sudoku grid is often presented as an 81-digit string. In this format, the digit 0 is used to denote an empty cell and all the values of the cells are concatenated into one long string. So the 81-digit string of the example grid is shown below.

Most good Sudoku Programs are able to accept such 81-digit strings as input, usually through their paste function. These programs usually also allow users to export the grid in any of the above text-based formats via their copy function.

Unless a given Sudoku grid can be solved using singles alone, most Sudoku players will need to maintain pencilmarks while solving the puzzle. Basically, the pencilmarks indicate the possible candidate digits for each empty cell. Practically all solving strategies operate by eliminating candidates from cells until only each cell has only one candidate remaining. Cells with only one possible candidate digit can be immediately placed with that digit, in what is known as the Naked Single technique. Due to the presentation of most Sudoku programs, the givens and the placed digits are often referred to as big numbers while the pencilmarked candidates are often referred to as small numbers. The same example grid with pencilmarks is shown in the graphic below. 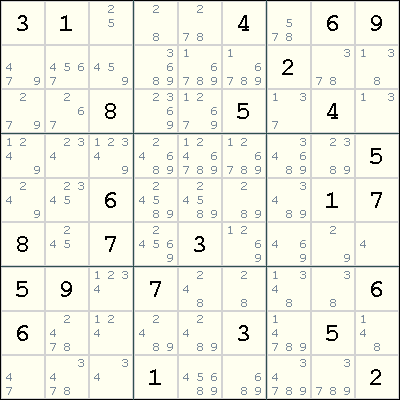 Again, for communicating in text-based forums, the text-based format for the grid with pencilmarks is shown below. It is sometimes called the candidate grid, and it has no notion of big numbers and small numbers.

Sudoku literature often makes references to particular cells, and the preferred notation is rncn. For example, r1c2 refers to the cell at row 1 (from the top) and column 2 (from the left). This is consistent with matrix notation in mathematics.

An alternate notation that is sometimes seen is the k9 notation, which uses a letter to denote the row and a number to denote the column. However, the k9 notation often causes confusion regarding whether the letter or the number denotes the column, and whether the lettering goes from top to bottom or bottom to top. Therefore, most Sudoku literature has adopted the rncn format.

Occasionally, we want to refer to groups of cells, as illustrated by the diagram below. 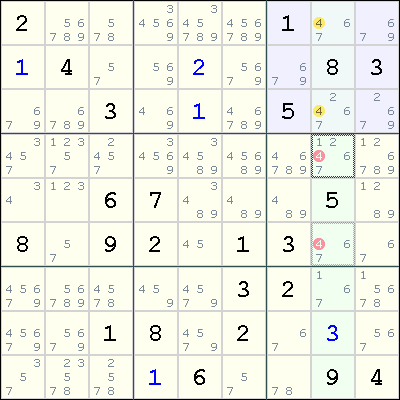 This diagram illustrates the Pointing Pair technique (click on that link for more). We want to reference both r1c8 and r3c8 (marked yellow), so we can use r13c8 to reference them. Similarly, to say that we are eliminating the digit 4 from both r4c8 and r6c8 (marked red), we can simply write r46c8<>4.

We use the Pointing Pair example again to illustrate the problem of communicating in text-based forums.

In this example, the logic behind the eliminations involves only a single digit, the digit 4. Thus some people choose to communicate the same message by showing only the cells with 4 as a candidate, like the one shown below. This kind of grid tend to be much easier to read than the grid showing the entire pencilmarks.

Note: Beginning Sudoku players may choose to skip the remainder of this section.

In more advanced techniques such as Uniqueness Tests and Bivalue Universal Graves, more elaborate markings may be used. The following example comes from Uniqueness Test. 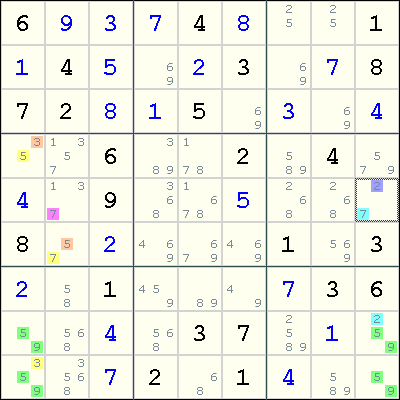 A number of solving techniques perform elimination based on the patterns for a particular digit, and hence called single-digit techniques. In order to highlight the concept without getting lost in the large number of candidates in a typical grid, the digit is usually generically referred to as X, and the community has also developed a kind of concept diagram. In such a diagram, each cell contains a symbol:

X
The digit X is a candidate in this cell. (It does not matter what other candidates this cell contains.)

- or /
The digit X is not a candidate in this cell.

. or no symbol
It does not matter whether this cell contains X as a candidate.

*
X can be eliminated from this cell.

Note that in such diagrams, - and * have different meanings from those seen in the pencilmark grid elimination diagrams. An example below:

This is the Pointing Triple technique, and it says that if the candidates for X in a box is confined to a row, then X can be eliminated from the cells in the row that are not in the box. (The logic is exactly the same with Pointing Pair.)

Some people choose to show such concept diagrams using an arbitrary digit instead of the symbol X. Usually, the digit 1 is used.

The fish-related techniques is a large class of single-digit techniques. Such single-digit concept diagrams have been further specialized to fish diagrams, by introducing a special symbol F for fins.

Such single-digit diagrams have been extended for multiple digits, but with an important difference. A cell may now contain multiple digits, but the semantics may mean that either the cell contains exactly these candidates as indicated, or the candidates of the cell is a subset of the indicated digits. Also, the eliminations may be for one or more digits, this will be stated in the accompanying description. For example:

This diagram illustrates the Naked Triple technique. It means that if we can find a boxrow such that the candidates of each cell of the boxrow is a subset of {X, Y, Z}, then we can eliminate X, Y and Z from the remainder of the row and the box containing the boxrow.

This is the XY-Wing technique, and the elimination is only for Z. Here, the three cells should contain exactly {X, Y}, {X, Z} and {Y, Z} as their respective candidates in order for this technique to be meaningful.

Note: Beginning Sudoku players may choose to skip this section.

Chains and loops are used in advanced solving techniques, and these have a set of notations. See the following articles for more information: